Legalizing gay marriage is a good thing but I am not sure that the way it happened is the best way.  My perception is that a liberal leaning Supreme Court ignored (mangled) the constitution, and a great many other Americans are going to feel the same way.  This is going to leave many people feeling screwed over.  "A man convinced against his will, is of the same opinion still."  People's views are not going to change just because the law changed.  Like the civil rights movement, it is still going to take decades.  Although it would have taken a very long time, it might have been better had the states gradually done this on their own.
Eighty seven percent of America
​​
ns are religious.  These people vary from mildly religious to deeply faithful and highly committed to their religion.  The majority of religious people believe homosexuality is wrong, although some are more tolerant than others.  What the supreme court has said is that people's deeply held beliefs are crap and we are going to force upon people a different set of beliefs.  I don't think that people will stand idly by and accept this.  There will be a nasty backlash.  There may be violence toward gays.  Liberals may see themselves voted out of office.  You may see a constitutional amendment defining marriage.
I think that over time people's attitudes will change, mostly due to public pressure, but it will require people to let go a major tenet of their deeply held religious beliefs.  That is a really big hill to overcome.
Best wishes,
John Coffey
Posted by John Coffey at 7:36 AM No comments: 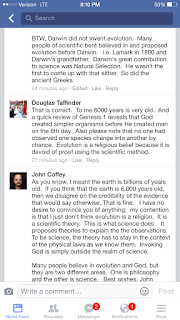 Posted by John Coffey at 5:29 PM No comments:

I'm sorry that you feel that evolution is a religion. In my opinion, evolution says nothing about the existence or non-existence of God. There are two facts that are irrefutable: The earth is very old and simpler organisms came before more complex ones. If you want to say that God made things happen that way, I'm fine with that. That would be philosophy. Science only deals with what we can observe, predict and reproduce. Evolution is the best explanation for what we observe. It is also supported by evidence from several sciences.

Darwin did not invent evolution. Many people of scientific bent believed in and proposed evolution before Darwin. i.e. Lamark in 1800 and Darwin's grandfather. Darwin's great contribution to science was Natural Selection. He wasn't the first to come up with that either. So did the ancient Greeks.

John Coffey
Posted by John Coffey at 4:39 PM No comments: